Rock music booms as a bearded man works hard and prepares a printing press for use. Dark graphic t-shirts and posters are scattered on the walls of the studio. A blue and white hand-painted sign reads “Get Sh * t Done”.

The same process he’s involved in is also used to make the buttons of a microwave, the rear defroster of a car, or the design of a band t-shirt. Screen printing is a technique that is ubiquitous, but rarely thought of by users of these products.

For Aaron Jenkins, screen printing is more than an overlooked detail – it is his artistic technique and career. He owns a screen printing company, The Black Arts Studio, which specializes in printing textiles and graphics. He prints t-shirts, clothes and posters, often for local companies and bands. This year he’s set a new goal: to print his own artwork every month.

Screen printing is a process of using mesh to transfer an ink design onto a surface using blocks or a stencil.

The actual printing itself is like meditation once you start. Once you go through the pressure movement, you don’t even notice the time that goes by. Aaron Jenkins

Located in the Delavan Center, a multi-purpose complex near the Nancy Cantor Warehouse with multiple studio spaces, Jenkins has no shortage of artistic neighbors to talk to about his work. Cayetano Valenzuela is an artist working at the Delavan who is a good friend of Jenkins and a cooperation partner.

Valenzuela’s business, Black Rabbit Studio, specializes in hand lettering and graphic design. Some of his most popular works are the handcrafted signs he creates for local businesses.

The latest collaboration between the neighboring artists is The Black Days Project, which is titled because of the word “black” in both company names. The sequence of Jenkins’ works tells a story, while Valenzuela’s pieces stand on their own, but also serve as a collection.

Jenkins’ January print is a black and white scratchboard illustration of a burning house with a small portion of a fictional story written below. In the same month, Valenzuela created a four-color drawing of a burning ship with the words “sinking or swimming” in Gothic script.

Jenkins usually uses pen and ink, scratchboard – a material for etching – or Photoshop to make his art. He takes inspiration from the album cover and says that he likes to include skull motifs in his work.

On Saturday the two printed their second pieces. They plan to hold an art exhibition for the project later this year and sell all of their prints as posters. Posters are currently sold online, in each of their stores, and at craft fairs.

“It’s a way for us to motivate each other to create works of art that people can afford,” Valenzuela said, adding that an original work of art could cost around $ 200 but a reproduction like a poster would typically cost $ 30 US dollars costs.

Although Valenzuela and Jenkins are now neighbors, their relationship began before they worked in the same building.

Years ago, both were involved in the central New York punk music scene, with Jenkins in a band and Valenzuela frequenting shows. Both get their aesthetic from grungy, gothic album art and add another layer to their shared passions of creating art and collecting posters.

Jenkins’ music career in a hardcore metal band Ed Gein originally led him to transition to screen printing. He and his friends named the band after the serial killer because they watched horror films on the weekend. Gein was the inspiration for some of the bad guys from her favorite movies like “Silence of the Lambs” and “Texas Chainsaw Massacre”.

After high school, when Ed Gein toured a lot, Jenkins, who had a flair for drawing and art since childhood, wondered after printing the band’s t-shirts and artwork: “Why are we paying someone else for it? ? I could do that. ‘ 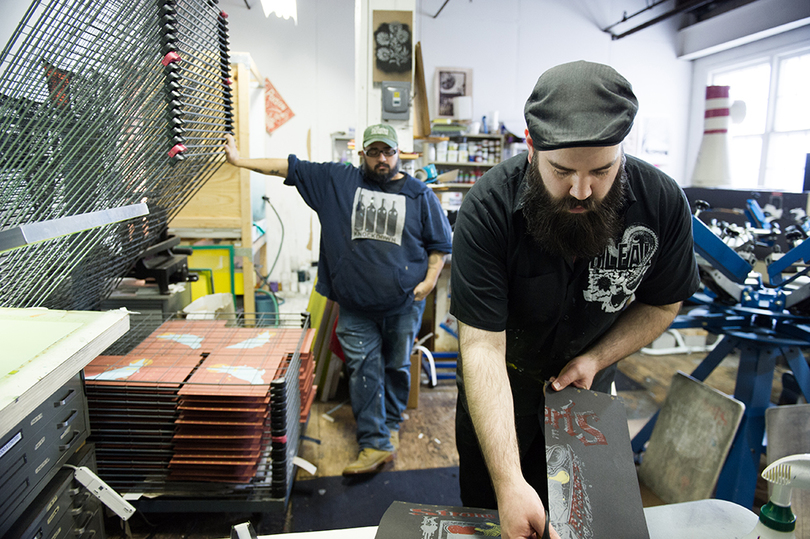 Soon he began teaching himself the basics of screen printing and doing part-time print jobs between tours. He took on a job as manager of a screen printing company that he had for seven years while doing his own work on the side. Eventually he reached a point where he could make a greater profit independently.

“The more I learned about (screen printing), the more I realized just how versatile it is,” Jenkins said. “It’s a very simple technique in one way and complicated in another. It’s this crazy mix of art and science. “

To this day he prefers to print for local musicians than for almost all other customers. He said when given the opportunity, he wouldn’t take jobs that he wasn’t interested in, such as printing for sports teams or schools.

It’s kind of a close community based on music that I mainly print for. Aaron Jenkins

Just as the two know each other from the punk scene, much of their business also gets away with it. Jesse Daino and Graham Reynolds, Jenkins bandmates, are the owners and managers of Recess Coffee House. The owners of Gorham Brothers Music, a guitar shop right on Erie Boulevard, also played in a band called The Engineer when Jenkins’ band was on tour.

Valenzuela said this group of local customers and business owners share with him and Jenkins the values ​​of punk culture, as he called them “DIY ethics”. Many customers they know from the music scene became self-starters and entrepreneurs. While they all started making music or going to shows, many of them started their own businesses and worked for themselves.

Valenzuela said, “When we’re young we go to punk shows and when we’re older we build things.”