Scientists from the University of Freiburg and the 3D printer manufacturer Nanoscribe have used a two-photon polymerization system (2PP) to produce microstructures from quartz glass with a resolution of just a few tenths of a micrometer.

Using their novel polymer-based resin “Glassomer”, the team printed 3D objects with a surface roughness of 6 nanometers, much less than the 40-200 nanometers that can be seen in many other pieces of glass. Going forward, scientists believe their unique printing, debinding, and sintering process could be used to create next-generation micro-optics with potential biomedical applications.

“With this technology, glass can be processed for the first time using one of the most exciting 3D printing techniques,” said Bastian Rapp, professor at the University of Freiburg. “This means that previously unattainable structural details and components with outstanding complexity are easily accessible.”

The development of microglass optics

Silicate glass offers a high level of optical transparency as well as thermal and chemical resistance, which makes it ideal for optical, microfluidic and chemical applications. In manufacturing processes such as grinding and polishing, however, it is often only possible to create objects with simple geometries and an accuracy of micrometers.

Similarly, when fabricated using laser-assisted etching techniques, silica glass parts tend to have rough surfaces of 40-200 nm, which requires excessive post-processing prior to use. 2PP, on the other hand, uses two-photon absorption, which traps the polymerizing voxel during printing and gives higher resolution parts with smoother surfaces.

The technique is widely used to make plastic, ceramic, or metal objects, and although extensive 2PP research and development is being carried out on glass, the process has not yet been perfected. Given the commercial biomedical potential of fully optimized glass silica parts, the Freiburg team decided to work with Nanoscribe to develop a revised 3D printing process. 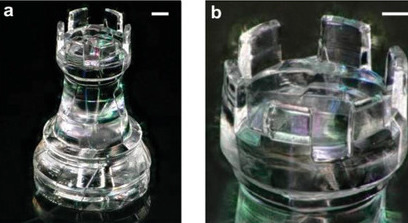 The researchers performed a series of tests on their nanocomposite, including 3D printing a complex glass chess piece (illustration). Photo via the University of Freiburg.

At the center of the researchers’ new method was the novel glassomer-silicate nanocomposite, which consisted of silica nanoparticles that were enclosed in a binder matrix. While the team had previously managed to use the material within an SLA process, it couldn’t be used for 2PP 3D printed glass optics due to its poor transparency.

To counteract this, the scientists increased the chemical cross-linking of their resin in order to achieve a higher curing speed. This not only added to its chemical stability, but also gave it a 91.6% transparency. Using the revised mixture and a Photonic Professional GT2 3D printer, the team then made a series of prototypes of polymeric nanostructures.

After printing, the samples were immersed in methanol to remove unpolymerized material and heated to a temperature of 600 ° C to remove their polymeric binder. The resulting parts were then sintered into quartz glass, and although these shrunk slightly, they could also be printed into highly complex structures.

To demonstrate this, the team printed three upright microlenses together that had a surface roughness of 6.1 nm without the need for post-processing. In addition, the devices had an average refractive index of 1.4585, which gives them almost identical properties to those of commercial glass optics devices.

With further research and development and an application-specific set of parameters, the team concluded that their novel approach could be used to create a new generation of ultra-smooth glass components with extensive applications in photonics, life sciences, and biomedical engineering.

Nanoscribe is one of the early leaders in an emerging 2PP 3D printing market, where companies compete to develop processes to make increasingly complex microscopic parts.

Nanoscribe presented its 2PP Quantum X 3D printer in June 2019, which can produce refractive and diffractive micro-optics as small as 200 micrometers. At the time, the company’s co-founder Michael Thiel claimed that the machine offered users “unparalleled freedom of design and ease of use”.

2PP 3D printing has also found experimental applications, and a team at the University of Grenoble has tried to control their additive microstructures using magnetic fields. By embedding microspheres in a Millennium Falcon print, the scientists were able to effectively make it “fly”.

The image shown shows a side view of one of the team’s 3D printed quartz glass lenses. Photo via Bastian Rapp.