The company’s end-to-end digital manufacturing factory ‘C-ZONE 01’ uses wired additive manufacturing (WAAM), a form of large-format DED 3D printing, to produce the PIXBOT and PIXLOOP autonomous chassis models. According to PIX, the use of topology optimization and 3D printing has reduced manufacturing costs by 60% and cut lead times by around 75%.

A PIX spokesperson said, “We believe we are contributing to the paradigm shift in the auto industry. With the new tools and visions, we can rebuild the manufacture and mobility of cars. “

PIX develops and manufactures autonomous vehicle chassis products such as the PIXLOOP. Image via PIX.

PIX first entered WAAM 3D printing in 2019, when the company developed its first autonomous vehicle chassis as a prototype. With the greatest challenge of incorporating WAAM constraints into a generative design workflow, the company attempted structural optimization using readily available tools such as Autodesk Generative Design, PTC Frustum, and Altair Inspire. While these programs worked reasonably well for conventional manufacturing techniques and even for PBF 3D printing, WAAM required a much stricter set of parameters.

To overcome this, the PIX engineers set themselves the task of designing their own generative design algorithm, which they called the “slime mold algorithm”. The algorithm was inspired by the pathfinding abilities of a slime mold in a Petri dish and enabled the company to automatically model its chassis prototype taking into account the limitations of WAAM 3D printing.

A slime mold looking for food. GIF via Heather Barnett.

Each design iteration created by the tool is subjected to static finite element analysis (FEA), which evaluates the performance of the structure with simulated stress and deformation. A human designer is then used to perform “touch-ups” and further optimize the base model according to the strict constraints of WAAM. It is ultimately up to the designer to strike a balance between structural integrity and weight, as reductions in material tend to increase the risk of part deformation.

This generative design-oriented 3D printing workflow makes up the largest part of the PIX production process to this day. The company is now aiming for high-volume 3D printing of the next generation of autonomous vehicle chassis structures with significant part consolidations, significant weight savings and minimal lead times via WAAM.

The PIX computational design team wrote, “This is necessary to revolutionize automobile manufacturing, which has changed little since Ford introduced the assembly line about a hundred years ago.” 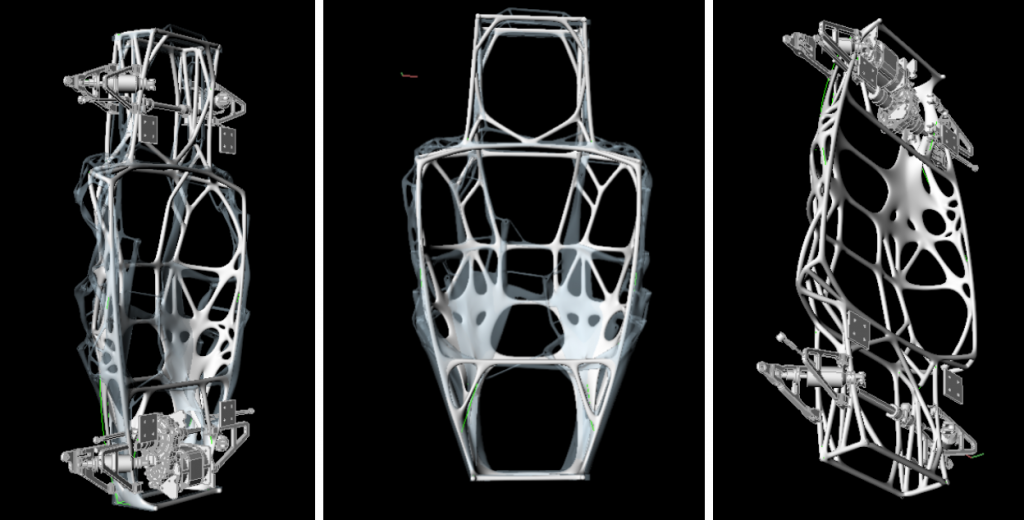 The generatively designed chassis structures from PIX. Image via PIX.

Generative design and topology optimization are an essential part of Design for Additive Manufacturing (DfAM) and are not only used in the automotive sector. In the sporting goods industry, the 3D printing service provider ADDIT · ION previously used generative design to 3D print a number of topologically optimized snowboard bindings. The bindings were developed in cooperation with the sports company Nidecker Group and offer maximum rigidity with the lowest possible mass.

OEM Stratasys 3D printer recently announced a partnership with engineering software developer nTopology to optimize the DfAM process for fixtures, fixtures and other tools. In particular, the partners will work together to develop a range of accessible, customizable DfAM programs for their users, starting with the FDM Assembly Fixture Generator.

The picture shown shows the autonomous vehicle PIXBOT from PIX. Photo via PIX.