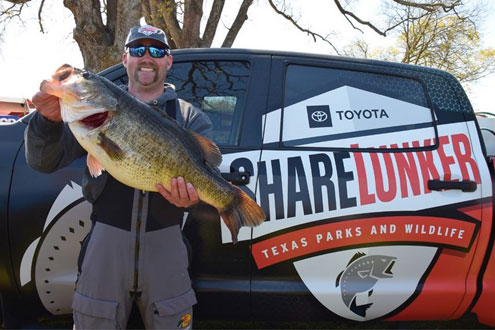 Athens, Texas – The 2021 Toyota ShareLunker collection season is listed as one of the best in the program’s history. Anglers landed 23 share holes at 10 different lakes across the state, most between January and March since the 1995 season when 27 were produced. Five new sea records were set, four lakes marked the program with a first entry and milestone ShareLunker 600 was caught in this year’s group.

?? This Toyota ShareLunker collection season was just historic in many ways, do we live for seasons like this one? said Tom Lang, director of the Texas Freshwater Fisheries Center. “We’re grateful that so many anglers caught the fish of their life this season and then decided to share their blowhole with us so we can make more of that bigger, better bass for future generations of anglers.”

It didn’t take long for the action to start thanks to angler Travis Moore, who rolled in the 9.44-pound ShareLunker 586 off Sam Rayburn Lake on January 9th. Three more Legacy Lunkers followed in January, starting with CJ Oates? 13.02 pound fish from Lake Austin January 15, the first entry for the lake since 2014. On January 29, Derek Mundy ShareLunker brought 588 weighing 13.62 pounds from Sam Rayburn, then staggered angler Daniel Ramsey ShareLunker 589 weighing 13.07 pounds from Lake Palestine.

The February cold snap didn’t stop the blowholes as Bussey, Iowa angler Joe McKay kicked off an insane hot streak at OH Ivie’s Biggest Legacy Blowhole with the massive 16.40-pound ShareLunker 590 on Friday evening February 19 of the season, a new sea record, and the 16th largest largemouth bass in the state’s history. The catch started in eight days with eight blowholes, six of which came from OH Ivie.

The month of March brought 10 more blowholes to complete the 2021 collection season. Lake Fork was the location for ShareLunker 598, which was wrapped by Stan Tencza of Yantis, Texas. Angler Travis Gill of Amarillo, Texas recorded ShareLunker 599 at OH Ivie, and Jason Gaston of San Angelo, Texas was honored to meet the ShareLunker 600 milestone at OH Ivie. ShareLunker 601 followed shortly after when it reached Jim Smith’s boat of Weatherford, Texas at OH Ivie. CR Stevenson III of Clyde, Texas set a new Coleman City Lake record at 14.83 pounds with ShareLunker 602.

Jimmy Faulkner from Carlsbad, New Mexico and James Crawford from Whitehouse, Texas were the next anglers to join the program with a Legacy Blowhole in 2021. Faulkner caught the 10th fish of the season from OH Ivie, which was in the books as ShareLunker 603. Crawford brought Lake Tyler to the board with the lake’s first legacy blowhole. ShareLunker 604 weighed 15.44 pounds and set a new sea record. It was also the second largest blow hole of the season.

The 2021 collection season ended in style with another run of four blowholes. Anglers Jeff Windham and Greg Denison from Brownwood, Texas and angler Donald Moore from Rhome, Texas have teamed up to produce the second triple blow-hole day of the season. Windham (ShareLunker 605) and Denison (ShareLunker 606) landed their fish in OH Ivie, while Moore (ShareLunker 607) set an Eagle Mountain Lake record at 13.08 pounds, the first legacy fish to come out of the lake. Then, this Sunday, Tanner Spurgin of McKinney, Texas crowned the 2021 season with the second catch of the year from Lake Fork. ShareLunker 608 weighed in at 15.27 pounds, making it not only the fifth fish over 15 pounds this year, but also the 23rd in the 2021 season.

Lake Fork couldn’t let the 2021 season go by without joining the £ 15 club. SL # 608 courtesy of Angler Tanner Spurgin of McKinney, Texas landed this 15.27 pounder during the Bass Champs Inc. mega bass event !! That’s 5 ShareLunkers over 15 pounds and 23 ShareLunkers in total for the 2021 collecting season!

The main highlights of the Toyota ShareLunker Collection 2021 include:

The OH Ivie Waterbody record was 16.4 pounds and is the 16th largest largemouth bass ever verified in Texas (private or public).

For the second season in a row an angler submitted two contributions (this season by OH Ivie, last season by Alan Henry)

Five entries were greater than 15 pounds.

Additionally, through genetic analysis of this year’s Legacy Lunkers, TPWD biologists have made some incredible discoveries regarding lineage to previous and other 2021 ShareLunkers. OH Ivie’s ShareLunkers 587 and 600 are related, while Coleman City’s ShareLunker 602 is likely the granddaughter of ShareLunker 410, who was caught on Lake Conroe during the 2006 season. Biologists have determined that at least two fish this season, Lake Travis ShareLunker 597 and ShareLunker 608 from Lake Fork, are fish from the Florida-only largemouth bass program that were produced and stocked at TPWD hatcheries.

“Similar to last season when ShareLunker 583 was classified as a 6th generation offspring, it’s always great to see genetic analysis confirm the efforts.” Said Lang. On the other hand, if ShareLunkers aren’t related to previous ShareLunkers, it’s great too because these fish add more genetic diversity to the effort for great bass. You really can’t go wrong with joining the ShareLunker program.

Anglers who have caught and donated one of these 13+ blowholes will be granted legacy class status. You will receive a catch filled with merchandise, a legacy sticker for your vehicle or boat, VIP access to the Toyota ShareLunker Annual Awards event and a high quality replica of your blowhole fish provided by Lake Fork Taxidermy. These anglers are also given entries in two separate drawings; a Legacy Class Drawing and the Grand Prize Drawing at the end of the year. Both drawings award the winner $ 5,000 shopping spree to Bass Pro Shops and an annual fishing license.

Although the ?? Legacy Class ?? The fundraising season has ended. Anglers entering data for each blowhole they catch are greater than 8 pounds. or 24 inches during the 2021 calendar year will also receive a fishing kit, a sticker for their vehicle or boat, and entry into the year-end grand prize drawing to win a $ 5,000 shopping spree for Bass Pro Shops and an annual fishing permit. The entry-level ShareLunker classes include the Lunker class (8 lb +), the elite class (10 lb +) and the legend class (13 lb +).

Once a blowhole is wrapped, anglers must enter the catch data using the Toyota ShareLunker mobile app. Available for free in the Apple App Store and Google Play? or in the Toyota ShareLunker online app at TexasSharelunker.com. In addition to providing basic catch information to TPWD researchers, anglers can also provide TPWD researchers with a DNA sample from their blowhole bass for genetic analysis.

To view or download photos of everyone ?? Legacy Class ?? ShareLunkers caught during the 2021 season visit the TPWD Flickr album.

American Printer – How Apple’s Three Easy Guidelines Can Make YOUR Occasions Higher Than...

The perfect Brother printers – WATE 6 On Your Aspect